What software to use for figures on Mac

Recently I was sitting next to someone at a conference and he was working on figures for a paper during a session. So far sounds pretty normal. Trouble was he was using microsoft powerpoint…on a Mac. I realized that we have neglected this important topic in Macademic.

There are several different software options for figures. Some people recommend using Keynote for simple figures. Keynote provides many basic functions such as smart connections between elements and alignment guides. This is certainly a possibility if you don’t make figures that frequently and they don’t need to be professional quality. Another alternative is Lineform which I used it for several years when I first switched to Mac. Eventually I found that it didn’t have enough features and was tedious to work with. Lineform has not been updated since approximately 2007.

Now I primarily use OmniGraffle and Adobe Illustrator. OmniGraffle is a smooth and relatively inexpensive program which is easy to learn and use. It allows you to work with both Layers and different canvases and has many features to draw and connect different shapes, manipulate the transparency and size of objects, as well as manipulate text. Here is an example of a figure in an academic article which was very quickly made with OmniGraffle: 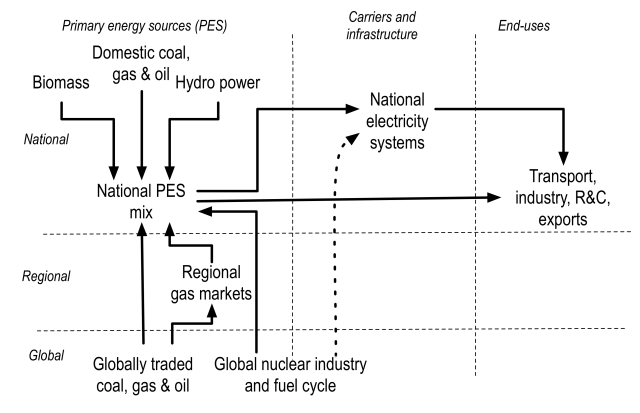 A figure made with OmniGraffle. Note how the connectors can attach to different points (‘magnets’) of the text boxes.

OmniGraphSketcher is a great program to sketch graphs with which can be useful particularly for preparing for class. I would only recommend using it for plotting the simplest graphs (both axes linear and relatively simple functions).

The one problem with OmniGraffle is that it doesn’t allow you to edit scalable vector graphics (svg) or PDF vector files. These types of files can only be manipulated in graphic software such as Adobe Illustrator or Inkscape (the open source version of Illustrator). Adobe Illustrator is a powerful piece of software but it’s really expensive and has a steep learning curve. It is initially pretty unintuitive. If you do want to manipulate svg or PDF vector files with Illustrator be sure to “Release clipping mask” under the “Objects” menu and also “Ungroup” objects.

10 Responses to What software to use for figures on Mac